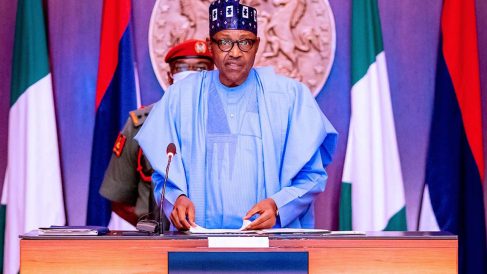 Biafra Nations League, BNL, has warned President Muhammadu Buhari against threatening secessionist groups in the Eastern part of the country with war.

The BNL said the people of the Gulf of Guinea are now wise enough to be used against the secession of Biafra as it was done in 1967.

“Buhari should not threaten Biafra agitators with war because the people in the Gulf of Guinea are wise enough not to be used against the secession of Biafra as it was done in 1967.”

Chief of General Staff of BNL and Leader of Displaced Bakassi Peninsula Youths, Linus Asuquo Essien gave the warning in a statement on Sunday while announcing its intention to hold a two-day convention to address issues affecting the Biafra struggle.

According to the group, most people are still ignorant of the reasons why they are fighting for the creation of the Biafra Republic, adding that the convention which will hold by the end of July will come up with solutions as to how they should engage other areas at the grassroots.

“[We] distance ourselves from the President description. Buhari is a joker who lacks the powers to decide where is Biafra and where is not Biafra.

“There was Eastern Consultative Assembly which consulted the people before Biafra was declared. Biafra and Igboland should not be mistaken.

“Igboland is in Biafra, while Biafra is situated in the Gulf of Guinea and cannot be blocked from accessing anywhere.

“BNL has a strong presence around the Igbo speaking areas in Rivers and Delta State. The people of Bakassi Peninsula are now well informed more than other areas being the headquarters of the group.

“The people are backing the struggle because they receive attacks from Forces in Cameroon and they don’t feel part of Cameroon.

“With the level of sufferings in Bakassi today, our people are ready to give their lives for the Biafra Republic, we can’t continue to face torture from a foreign country, even the Nigerian government have abandoned the Greentree Agreement so why should we not back Biafra to secede when we know that if we succeed, sovereignty over Bakassi would return to Biafra and entire Efik people”.

He said the BNL is capable of sabotaging the maritime activities of both Nigeria and Cameroon in the Gulf of Guinea, adding that they have access to anywhere, both at the Ejagham land borders and the Peninsula and can acquire anything they want through their areas of influence.

BNL recalled the Marua Agreements in 1970 end of the Biafra war between Nigeria and Cameroon over the Bakassi Peninsula which saw the defeat of Biafra as the main inspiration, adding that the BNL has all it takes to destroy the presence of the Federal Government in the Peninsula.

TAGBiafra Group Buhari President
Previous PostFani-Kayode Meets Yahaya Bello, Says “Nigerians Will Have Every Reason To Smile Again” Next PostOther People Are Busy Killing Themselves In Nigeria While God’s People Are Investing – Oyedepo