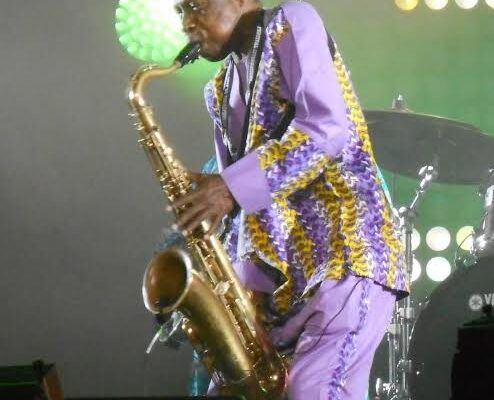 The ‘A dara, a dara’ singer, among many other acclaimed songs, died hours ago, at the age of 79.

The passage was relayed by his widow, Latoya, through music promoter and Evergreen Music boss, Bimbo Esho.

Bimbo, Daddy Has Passed On…

“This was the message I stumbled on waking up at exactly 3am to peruse my WhatsApp page.. It was a message sent in to me by Orlando Julius beautiful and supportive wife Lady Latoya.

“Orlando Julius, a native of Ijebu Ijesha, succumbed to the cold hands of death and breathed his last few hours ago at the age of 79.

“We shall miss one of Nigeria’s fathers of Afro/Highlife Music , a gentleman and a fine Saxophonist.

“May daddy Orlando Julius soul journey well . To the entire Ekemode family may God give you the fortitude to bear this irreplaceable loss.

Although the ‘Jagua Nana’ singer had been slowed down by age some years before his death, his rich bank of songs continued to define his essence as a great multi-talented musician.

His big role in the industry got highlighted last year, when many stakeholders gathered in Ilesa, Osun State, to celebrate his 60 years on stage.

Orlando Julius related well with musicians of different countries and ages, as he was able to court even younger artistes that include Beautiful Nubia and Edaoto, at whose shows he occasionally performed.

Julius was born in 1943 in Ikole, Nigeria to a merchant family during British colonialism. His first musical teacher was his mother, who would sing and dance while he played drums. He went to St. Peter’s Anglican School in Ikole and played in the school band.

His Wiki profile further indicates that in 1957, after dropping out of school and the death of his father, he left for Ibadan to pursue a career as a musician.

He worked at a bakery while playing the drums or flute with juju and konkoma bands. There was no music school in the area at the time, so the premier, Obafemi Awolowo, created one in his political party’s secretariat.

He spent time trying to connect with highlife musician Jazz Romero, doing chores for him hoping to garner enough favor for music lessons. Romero invited him to play with his band at a hotel in Ondo, learning his first chords on the instrument that he would become best known for, the saxophone.

When Romero got into a conflict with a nightclub owner and walked out on a gig, Julius stepped in as bandleader. Not long after, back in Ibadan, he joined Rex Williams’ highlife band. In lieu of formal lessons, he consumed as much music as possible, buying records of any horn-based music he could, but especially the highlife music out of Ghana which had become popular in Nigeria, too.