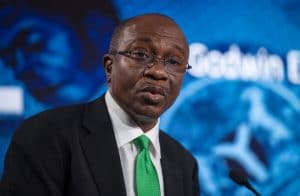 The Arewa Youth Assembly has reiterated its call for Godwin Emefiele to resign as Governor of the Central Bank of Nigeria in order to arrest the dwindling economy in the country.

A statement from the assembly’s Speaker, Mohammed Salihu Danlami, said, “We stand firmly by our words at the Arewa Youth Assembly asking Mr Emefiele to resign his post as the Governor of the Central Bank of Nigeria. This is necessary because every point raised against Mr Emefiele is factual and verifiable.”

The group noted that no amount of sponsored damage control can profer solutions to many economic woes an average Nigeria is subjected to daily, but will rather ignite the anger of the masses who are now finding it extremely difficult to even feed their families.

It stated that it is a shame that Emefiele and his co-travelers would stoop so low to hire attackers, who in their hundred could not stop a naked economy reality on ground, adding that this is a critical moment in the history of the country’s economy.

The statement explained that it is not unaware that there are merchants in every crisis, assuring that they would not relent on their call for better Nigeria until they have competent hands managing it.

The statement noted that it is equally laughable to hear that their brother, Mr Yerima Shettima, who has been hiding under Arewa Youth Consultative Forum, could turn around to describe the call for Emefiele’s resignation as research not well carried out.

“Can any sane person deny the current economic realities where our foreign exchange keeps falling daily?” the group asked.

It asked if anyone could deny the fact that Nigerians who are struggling to earn a legitimate living are finding it difficult to have access to foodstuff with skyrocketing prices each day.

It further asked if anyone could deny the fact that all the self-acclaimed interventions under the current CBN leadership have not reduced the number of unemployed youths across the country thereby leading to rising crimes.

The group said it is an open fact that naira was ₦170 against the dollar before Mr Emefiele’s emergence as the Governor of the CBN. But today, due to his weak policies, it is ₦550 against a dollar and still counting.

According to the statement, some myopic individuals would attribute the fall to the pandemic, asking if other countries were also not grappling with the same issues. It added that it is disheartening and very disappointing that some youths of this generation can still throw the fear of God into the dustbin just for the sake of the money and defend this abnormality.

It said it was stated by Mr Shettima that Emiefele is stabilizing the economy in more ways than one, and the question here is how.

“Shettima should bury his face in shame as Nigerians know that he is not after their welfare but his interest. Unfortunately, Emefiele and his co-travelers will engage the service of a man defrauding people in the name of Arewa Youth Consultative Forum where he is all-together the president, secretary, PRO, financial secretary and treasurer.

The statement observed that maybe Mr governor and his co-travelers forgot that Nigerians are aware that even the COVID-19 loans that originally should be made accessible to all Nigerians irrespective of their status have turned to the exclusive reserve of certain individuals in the National Assembly and cronies of Mr governor.

It also queried Shettima, who is a self-acclaimed research guru, if he is not also aware that CBN failed to remit about N800 billion to the Federal Government, asking him to also comment on the CBN’s failure to submit its audited report to the office of the Accountant General of the Federation since 2010.

The group said it had made its points clear, Mr Emefiele should resign and face his presidential ambition squarely as it is his exclusive right to do so.

The group called on President Buhari to do the needful by sacking Emefiele who is like a mole in his government if he fails to honourably tender his resignation.

It added that the clamour for a just and progressive Nigeria is on course and Nigerians are not backing out. We shall follow it to a logical conclusion.