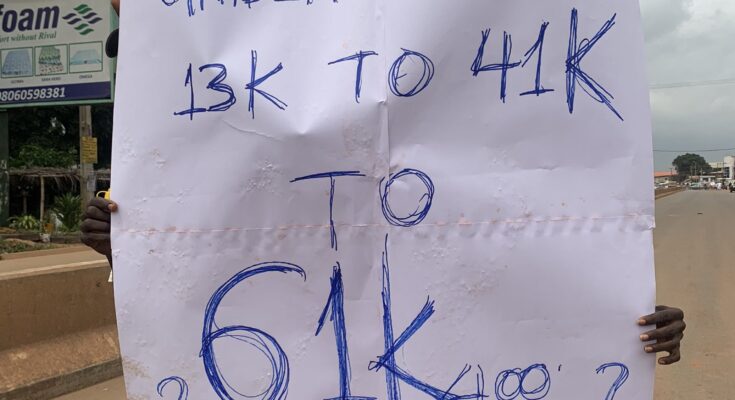 The students of the University of Benin, Edo State have staged a peaceful protest, blocking the ever-busy Benin-Lagos road in the Edo State capital.

The student also held the Ekheuan Road to a standstill in protest over an alleged N20,000 late registration fee imposed by the school authority.

The students who took over the major road at the Ekheuan campus attributed their action to the school’s ‘indiscriminate increment in their school fees.’

Students at the Ugbowo campus also blocked the Benin-Lagos Expressway for hours in protest against the fee.

The students bearing placards with varying inscriptions such as: ‘Federal Uni don turn BOWEN’; ‘UNIBEN no be BOWEN, urgent 20k no be our budget’; ‘Oppression comes in different forms’; ‘We didn’t sign for this injustice’, played solidarity songs with public address sound system as they protested.

One of the protesting students told newsmen that an additional N20,000 was added to their school fees within two weeks after the portal was opened.

She lamented that the portal has often been down due to server issues and denied students access to pay their fees.

She also said students were given September 3 as a deadline to pay their fees, with a warning that payment after the said date would attract an additional N10,000.

But to their dismay, an additional N10,000 was added without any prior information to that effect, bringing the increment to N20,000.

“They added N20,000 to our fees within two weeks. And now the PRO is saying anyone that fails to pay before next Saturday would be denied admission, that is, the admission of such students would be withdrawn,” she said.

“The PRO saying it is a privilege for us to be given admission to study at UNIBEN is wrong! It is not a privilege, it is our right to study at any school in Nigeria as Nigerians,” another student berated the PRO.

“Is it possible for a student who could not pay on time due to paucity of funds to pay the fine in addition to the school fee? I will urge the management to have a rethink and rescind this unpopular decision. We have resolved to continue the protest until our demand is met,” a 200-level student posited.

“The management should call the students Union Executive Council for a round table meeting. I believe so much in diplomacy and the student body also believes in dialogue.

“We love our Vice-Chancellor very much and we believe she will hear our cry as well as reverse the extra charges.”

The gridlock forced many passengers to highlight from their vehicles to walk to their destinations.