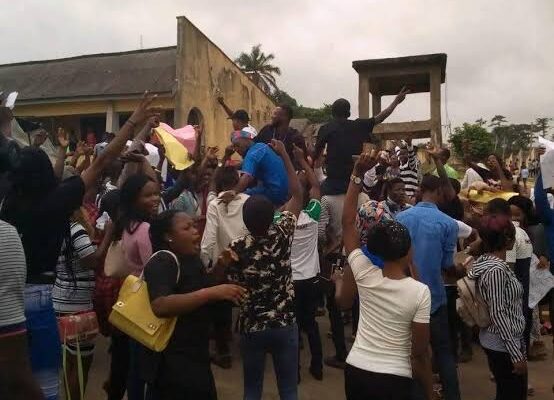 THE Management of the Osun State Polytechnic, Iree, has suspended the ongoing first-semester examination for the 2020/21 session over student protest.

The examination which commenced on Monday was disrupted on Tuesday afternoon by some students who have not paid their tuition fees and were not allowed to sit for the papers.

It was gathered that affected students were dissatisfied with the imposition of a late registration fee of N20,000 on them, pleading that the condition should be waved to allow them to register for the courses and sit for the examination.

The management however did not yield to the plea insisting on a “no clearance no examination” policy.

Report obtained that some students sneaked into PLT 3 examination hall on Tuesday afternoon to write the paper scheduled without clearance but were fished out and asked to vacate the hall, but rather leave the examination venue, they resorted to disrupting the exercise.

A student who was in the school at the time said, “the aggrieved students started pelting stones at the supervisors and other students already seated for the examination. A female student was injured on the face. She was hit by an object”. 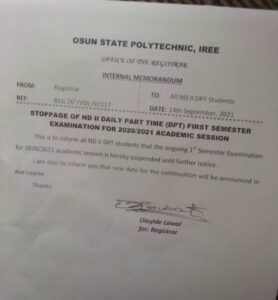 Reacting to the development, the school’s Public Relations Officer, Mr Tope Abiola described the students’ as “unserious”, wondering how they intend to sit for the examination for courses they failed to register.

“The students are not serious, they didn’t pay fees after 15 weeks of resumption. The school gave them six weeks to pay school fees and register for their courses but they did neither pay nor register for any courses.

“The school, in it, bid to sanitize the system and curb impersonation mandated the students to pay their fees and register their courses within six weeks after which the portal with the commencement of the examination.

“However, after meeting with the management today, the ongoing examination was magnanimously suspended and gave them the grace to do the needful within five days. Hopefully, they may resume the examination by Monday, only those who have paid would be allowed to write their examination”, he said.