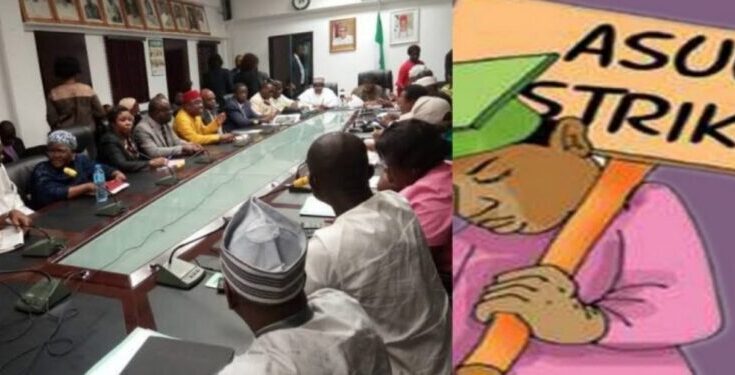 The national leadership of the Academic Staff Union of Universities, ASUU has warned it might embark on another strike action.

ASUU asked Nigerians to hold the Federal Government responsible it embarks on another strike.

According to ASUU, if the outstanding issues in the Memorandum of Action (MOA) of December 23, 2020, and issues related to the draft renegotiated agreement of May 2021 are not signed by August ending, it might proceed on another strike.

National President of the union, Comrade Victor Emmanuel Osedeke, disclosed this on Monday at a press conference in Ilorin, the Kwara State capital, at the end of the National Executive Council meeting held at the University of Ilorin.

He urged Nigerians to put pressure on the Federal Government to sign the agreement in the bid to forestall any imminent strike action by the union.

“ASUU hopes authorities at both the Federal and state government levels would give these matters the urgent attention they deserve to sustain and improve on the current industrial peace on our university campuses,” he stated.

“As at now, a number of issues which border on the welfare and working environment of our members hang precariously on the path of smooth working relationship between ASUU and governments (Federal and State) in Nigeria.

“Most topical among these are the outstanding issues in the Memorandum of Action (MOA) of 23rd December,2020 and the issues related to the Draft Renegotiated Agreement of May 2021.”

Comrade Osodeke condemned the plight of state-owned universities saying, “The union is particularly petrified by the declining fortunes and their utter neglect by state governors whose responsibility it is to fund, staff, equip and make the universities nationally and globally competitive.”

He warned that unless urgent and necessary steps are taken, our state-owned universities may soon collapse beyond redemption, hoping that the concerned state governors, governing council and other individuals and agencies would rise to prevent the calamity.

The ASUU President called on all owners of state universities to, among other things, urgently make adequate budgetary provisions for both capital and recurrent expenditure for infrastructure, staff development and payment of staff emoluments starting with 2022 budgets.

Osodeke, also asked for provision of functional pension schemes in line with the 2014 Pension Act, and payment of all salaries and allowances (Including EAA) owed staff with a concrete plan for regular payments subsequently.

He further requested the domestication of the Universities (Miscellaneous Provision) (Amendment) Act of 2012 in all universities where that has not been done.

The union boss further asked the owners of state universities to pay all arrears of third-party deductions such as check-off dues, cooperative contributions and bank loans and pension deductions.

He cautioned against forms of threats and victimisation of ASUU members who legitimately speak out on behalf of the union on the need to address the nagging issues.

On the state of the nation, the union lamented the worsening insecurity situation particularly as it affects the country’s educational institutions.

“Indeed, the mystery surrounding the sudden disappearance of Professor R.B.Adeniyi, of the Department of Mathematics, University of Ilorin, like some others before him on our campuses, had remained unresolved for several months,” he noted.

Comrade Osodeke, charged Nigerian rulers to look inward, tackle corruption headlong, use intelligence to fight insecurity and gird your loins for home-grown solutions to Nigeria’s problems before other countries and the global community could take us seriously.