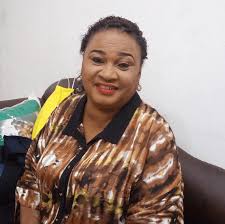 Zebra News also gathered that the light skinned talented thespian gave up the ghost around Friday night at her residence after being in and out of hospital for an undisclosed illness.

Her Family is devastated by the shock of her death, although they are yet to issue an official statement.

64 years old Rachael was a star actress in the popular movie, Chief DaddyUpdate
EAD: We wish to add you to our WhatsApp Database to get our trending and latest news directly into your WhatsApp Box as the news breaks.