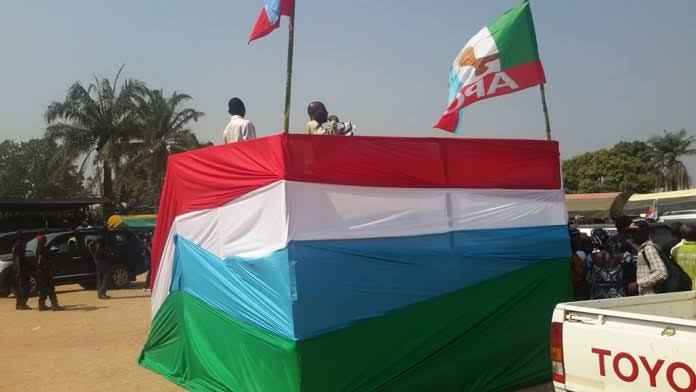 One person was killed and many others injured as the ruling All Progressives Congress (APC) ward Congress turned bloody in Ekiti State.

It was gathered that the APC ward congress in the state was on Saturday characterised by violence and shooting as polling units across the 177 wards experienced tension by suspected political thugs.

One person identified as Jide was killed during the exercise at the Ado ward 10 while several persons sustained varying degrees of injuries.

A source, who was at the venue of the ward 10 congress, which took place at the pavilion close to the popular Fajuyi, said, ” After the congress was concluded, the boys who were on drugs had a disagreement among themselves and before you know it, it turned to free for all.

Jide was stabbed and rushed to the General Hospital where he was confirmed dead.

The process commenced on a peaceful note as there was a massive turnout of members before violence broke out over what mode to adopt for the exercise.

While loyalists of Governor Kayode Fayemi rooted for consensus arrangement across the 177 wards, the other faction comprising mostly members of South West Agenda 2023 for Bola Tinubu (SWAGA) insisted on election.

It was gathered the firm opposition to consensus option led to widespread violence across the State as thugs allegedly injured many and destroyed vehicles.

Many of the injured members are receiving treatment in one of the private hospitals in the state capital.

Also in Ado-Ekiti, there was violence in Ward 4 and 8 as thugs went on rampage to disrupt the voting process.

Speaking on the botched ward congress, Ekiti chairman of SWAGA, Senator Tony Adeniyi, decried the widespread violence which marred the process, saying that there was no congress in the State.

“There was no election today in Ekiti because there was no accreditation across the wards. The Fayemi Tokan Tokan people manipulated the process and prevented people from voting for their prefer leaders, especially SWAGA members.

“I can confirm to you that there was violence in Ikere-Ekiti, virtually all the wards in Ado-Ekiti we had violence and several people wounded and also in Ward 10, someone was killed. Is that how to do a congress?”

However, Ekiti APC spokesman, Ade Ajayi denied the allegations, saying every member was allowed to participate in the congress.

“I can tell you that nobody was deprived of the congress today (Saturday) and it is our hope that it will be an acceptable one by the stakeholders. It is blatant lie to say that people were deprived, people participated in the process.”

A chieftain of the party and governorship aspirant, Chief Reuben Famuyibo, lamented politicians failed democracy in the State with the level of violence which characterised the ward congress.

Famuyibo, an elder statesman, explained he would address the press in the coming days on the process.

He said: “As predicted by me on Friday, there was no election today, what you see is thugs moving around the wards.

“The blood of any citizens does not worth my ambition. When I got to the ward today, I returned home, this is not democracy and our politicians have not learnt any election and it is unfortunate. We await what the national secretariat will do it.”