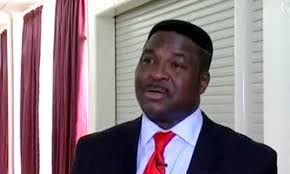 Human rights lawyer, Mike Ozekhome, SAN, has asked the Federal Government to go beyond the suspension of micro-blogging site, Twitter, and “dissolve the Nigerian people which it has become so allergic to and no longer wants to see or hear about”.

The senior advocate also said the government is trying to cover its atrocities from global exposure with its decision to suspend the operations of Twitter in the country.

He made this known in a statement on Friday titled, ‘When A Tottering Government Twiddles Twitter’.

Consequently, Minister of Information and Culture, Lai Mohammed, announced the suspension of Twitter on Friday, citing the “persistent use of the platform for activities that are capable of undermining Nigeria’s corporate existence”.

Mobile network operators also said they received a directive from the Nigerian Communications Commission to block access to Twitter in the country following the suspension by the government.

Reacting in a statement, Ozekhome said, “Well, I am not surprised that the Federal Government has suspended Twitter operations in Nigeria. Are you? I have always said that this Government has a very thin skin for criticism. It is a government that cannot take punches, but delights in always giving punches to adversaries, real or imaginary.

“The Government knows that Nigerians now express their resentment and protest through Twitter, by telling the whole world how Nigeria has been turned into a corruption haven, and a sprawling field of butchery, extra-judicial executions and slaughtering.

“Those in Government do not want the world to hear about their atrocities. So, they just gleefully tell the world that they have suspended Twitter and that they would soon license other OTT and social media operations. These people in Government know that Nigerians have been reaching out to the whole world, and they are very embarrassed that the breeze has been blowing, and the smelly backside of the fowl is always being opened for the whole world to see and smell its odorous side.

“This is the same Government that undeservedly rode to power using the same Twitter and other social media platforms it now detests.

“My humble appeal to this Government is that it should go further than this. It should actually suspend or dissolve the Nigerian people which it has become so allergic to and no longer wants to see or hear about. Then, it can now go ahead to elect or select another people in place of the present Nigerians who appear to have become a nuisance to it.

“I am greatly disappointed about this government round and round. I feel very sad as a Nigerian being led by a Government of one scandal per day.”