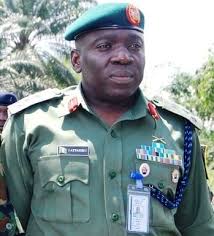 Nigeria has been thrown into mourning following the death of the Chief of Army Staff, Lt General Ibrahim Attahiru, in a plane crash on Friday, May 21.

The plane conveying the army chief and other top military personnel was said to have crashed on a trip to Kaduna due to bad weather.

VAM news has gathered some facts about the late military commander as seen below:

1. General Ibrahim Attahiru was born on August 10, 1966. He is an indigene of Kaduna Kaduna state.

2. The late military commander is an alumnus of the Regular Course 35 of the Nigerian Defence Academy (NDA). He was commissioned as a second lieutenant immediately after he graduated from the academy.

3. Attahiru once served as the commander of Operation Lafiya Dole, a special military unit designed to fight the terrorist offensive in the northeast.

4. He was, however, removed as the commander of Operation Lafiya Dole due to an increase in Boko Haram attacks and his failure to capture its leader, Abubakar Shekau, dead or alive within 40-days.

Gen Ibrahim Attahiru becomes second Nigerian Army chief to die in air cras
5. After his sack from the position, Attahiru was replaced with another general, Nicholas Rogers.

6. Before his appointment as chief of army staff, Attahiru headed the 82 Division of the Nigerian Army.

8. Gen Ibrahim Attahiru was born in Kaduna and died in Kaduna.

ALSO READ  Simple Solution To Get Rid Of Fibroid

10. Lieutenant General Ibrahim Attahiru served as the 25th Chief of Army Staff of the Nigerian Army from 26 January until his death on 21 May 2021.

Meanwhile, though details about the crash that killed Attahiru are still sketchy as at the time of filing this report, a military source said that it happened close to the Kaduna International Airport on Friday evening, May 21.

It was gathered that the ill-fated aircraft crashed at the airport’s runway about 6pm.

The commissioner and chief executive officer of the accident investigation bureau, Nigeria, Akin Olateru, confirmed that the eight souls died onboard.

The incident is drawing reactions from Nigerians who are pained by the death of the COAS and the others aboard the plane.

ALSO READ  A MUST READ: Tinubu and the Yoruba philosophy of Oloore

Mistery: Lieutenant General Ibrahim Attahiru died on the 21st day of the 21st year of the 21st century. What a coincidence!

TAGFacts General Ibrahim Attahiru Mystery
Previous PostNo Amount Of Money Can Buy My Conscience Or Support - Obasanjo Next PostSee What US Said Concerning The Death Of COAS Gen. Attahiru