Simon Imobo-Tswam, Special Adviser on Communication and Strategy to the National Chairman of the Peoples Democratic Party, Iyorchia Ayu, has described as false a report stating that his principal had been suspended from the position.

According to the report, the suspension followed an emergency meeting of the PDP National Working Committee.

Reacting, Imobo-Tswam said, “Even though we do not wish to dignify falsehood with a response, an official reaction is necessary in order to stem the tide of misinformation.”

This was contained in a statement, titled, ‘Ayu still PDP National Chairman,’ made available to newsmen on Wednesday.

“It was in that acting capacity that he (Damagun) today, presided over the inauguration of the Osun State Gubernatorial Campaign Council, headed by the Executive Governor of Bayelsa State, H.E. Douye Diri

“If not that the authors of the mischievous and baseless Facebook posts were out to serve nefarious interests, they would have heard when the acting national chairman, Amb. Damagun, said during the ceremony today: “On behalf of my able National Chairman, Dr Iyorchia Ayu, I hereby inaugurate you.”

“The general public is, therefore, advised to ignore the mischievous social media publications as they are purely the work of mischief makers and idle minds.” CONTINUE READING……. 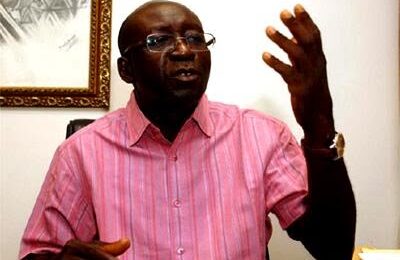 Ayu reveals those behind lawsuit against PDP, Atiku: “It’s not Wike”