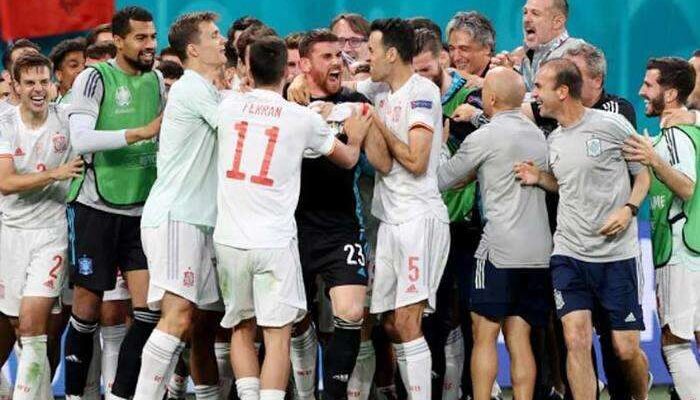 Switzerland vs Spain ended in the dramatic pena,ty shoot-out as Luis Enrique’s men ran away as winners by 3-1 after playing 1-1 at regulation time.

The three-time European champions will now play the winner of Belgium and Italy at the Wembley Stadium.

The match started on a promising note for Switzerland as they attacked in the opening minutes but was Spain that scored first. It did not take long before Spain got their noses in front in the eighth minute as Jordi Alba’s shot was deflected into the back of the net by Den Zakaria.

The Swiss side came back in the second half stronger and were rewarded with the pressure they put on their opponents to get an equalizer.

Xherdan Shaqiri was at the end of a finish from a well-worked team play from the Swiss as Remo Frueler assisted the Liverpool forward to grab the equalizer in the 68th minute.

Switzerland were reduced to ten men after Freuler’s two-footed challenge on Gerrard Merono was seen by referee Michael Oliver as dangerous as the Englishman sent the defender off in the 78th minute.

There were no more goals across 90 minutes as the match went into extra time with Spain having to play against ten men.

La Roja were dominant as they produced ten shots in the first half quarter of an hour period but none hit the back of the net.

The second half of extra time did not also produce the winning goal as it went to into penalties.

Sergio Busquets missed the opening spot-kick as Rodri had his effort from nine-yards saved from Yan Sommer.

On the other hand, Mario Gavranovic and Manuel Akanji were also denied by Unai Simmon as Riben Vargas skied his effort into the stands. Mikel Oyarzabal then sent Spain into the semi finals as he set Sommer the wrong way with a decisive spot-kick.